Unwrapping the controversy over swaddling 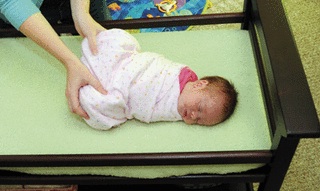 Unwrapping the controversy over swaddling

Copyright © 2013 by the American Academy of Pediatrics

When Danette Swanson Glassy, M.D., FAAP, meets her newborn patients in the hospital, they often are bundled up in a swaddle.

“As everybody knows, babies are born and cleaned up and then put in a nice, tight swaddle to keep them comfortable and warm,” said Dr. Glassy, chair of the AAP Section on Early Education and Child Care Executive Committee. “They love it. You can see it on their faces. The problem comes when we don’t have a clear idea of when to tell parents to end it.”

Swaddling has become the subject of controversy.

In 2011, the National Resource Center for Health and Safety in Child Care and Early Education recommended against swaddling, saying it could increase the risk of sudden infant death syndrome (SIDS). Then, Minnesota banned the practice in child care centers, while other states have addressed swaddling in their child care licensing standards. For instance, a preschool in Liverpool, Pa., was shut down in March for several violations, including improperly restraining infants by wrapping a blanket tightly around them.

The National Resource Center also objects to swaddling because it can cause hip problems.

Working on a Navajo reservation, Richard Schwend, M.D., FAAP, saw a lot of hip dysplasia among babies carried around in tight swaddling. Modern swaddling calls for freedom of the legs and hips, said Dr. Schwend, chair of the AAP Section on Orthopaedics Executive Committee.

“With modern swaddling, the theory is that kids have startle reflexes that they don’t have control over,” he said. “If you can secure their arms, they have the benefits of swaddling without the risk to the hips.”

The blanket also needs to be loose enough that a hand can fit between the blanket and the baby’s chest so the baby doesn’t have trouble breathing. But the blanket can’t be so loose that it unravels.

Because data about the benefits and safety of swaddling conflict, the Academy has not taken an official stance on the practice, said Rachel Y. Moon, M.D., FAAP, lead author of the AAP safe sleep guidelines and chair of the Task Force on SIDS. But, Dr. Moon said, babies should not be swaddled past 2 months of age.

“Given that we see deaths from babies who are swaddled and end up on their stomachs by 2-2½ months, I get really nervous when babies are swaddled past the age of 8 weeks,” Dr. Moon said.

Because child care centers typically take infants when they are about 2 or 3 months old, child care providers should not be swaddling babies, Dr. Moon said.

Those recommendations are at odds with what Harvey Karp, M.D., FAAP, endorses in his book, The Happiest Baby on the Block. He has been an outspoken advocate for safe swaddling as he touts the five S’s — swaddling, side/stomach position (The AAP and others recommend babies always be placed on their backs to sleep), swinging, shushing and sucking — for calming fussy babies.

“If we can reduce crying and increase sleep, that is a good thing,” he said.

Parents should learn about safe swaddling when pediatricians first unwrap their newborns in the hospital, Dr. Moon said.

Swaddling also should come up at well visits as part of a conversation about healthy sleep habits such as always putting babies to sleep on their backs. Swaddling can be brought up as a safety issue, just as a doctor would bring up the danger of leaving a baby unattended on a changing table, Dr. Glassy said.

“Two months is an important touchstone to talk about sleeping,” she said. By then, parents who are going back to work are making child care arrangements and at the same time, their babies are beginning to move around more.

Jennifer Shu, M.D., FAAP, medical editor of the AAP Healthy Children website, agrees that parents should be encouraged to use safe techniques if they choose to swaddle their babies. They also should stop swaddling when the potential risks outweigh the potential benefits.

Parents will be looking for alternative ways to help babies sleep, and a wearable sleep blanket may be one option, added Dr. Shu, author of the book, Heading Home with Your Newborn: From Birth to Reality.

“If parents understand the reasoning behind limiting swaddling to younger ages,” Dr. Shu said, “they will be more likely to follow the recommendation.”