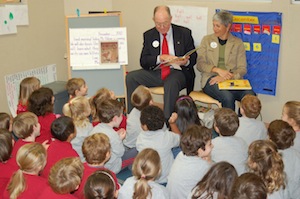 Jerry Odom, executive director of USC Foundations and his wife, Toni, read to children at the Children’s Center at USC as part of Dr. Jerry Odom Day.

Dozens of tiny hands were extended to Dr. Jerry Odom to thank him for being an advocate for their child care center.

Young children and parents greeted Dr. Odom as they arrived for child care at the Children’s Center at the University of South Carolina on Dec. 6. Declared “Dr. Jerry Odom Day,” the celebration featured a morning reception, a presentation of a book of thank-you notes from the children and a session of music and reading with children.

Dr. Odom is credited with keeping the Children’s Center open, despite past funding and logistical challenges. A former USC chemistry professor, department chair, dean, then provost and executive vice president for academic affairs, Dr. Odom is now executive director of USC Foundations. He is retiring from USC this month, after 43 years of service.

Dr. Odom, whose own daughter received childcare years ago at the USC Children’s Center, said he felt the need to become an advocate for the Children’s Center when it was threatened with closure.

“We have always had a reputation for being at the forefront of early childhood education. It was clear that we needed to continue to do this,” he said. “I couldn’t close it. It just wasn’t the right thing to do.”

The Children’s Center at USC provides child care for children ages six weeks to 12. USC faculty and students enrolled in education, art, music, physical education and the medical school are regularly involved with the children at the center. Also, the Children’s Center partners with agencies and groups, including the South Carolina’s Department of Social Services’ ABC Child Care Program.

The Children’s Center was founded in the 1960s and had several other locations before its current home on Wheat Street. In 1997, the center was threatened with closure because of financial and location challenges and Dr. Odom began his crusade to keep the center operating.

In 2005, the USC Foundations became the owner of the Children’s Center, which operates as a non-profit 501(c)(3). The center cares for the children of USC faculty, staff and students, as well as those of the general public.

The two-story, 28,000-square-foot building includes 12 classrooms for children, a commercial kitchen, administrative and staff areas and a lunch and activity room. The upper floor is home to USC’s Yvonne and Schuyler Moore Child Development and Research Center.

“Dr. Odom was our champion at the university when the center was threatened with closure. He was a powerful and committed advocate.” said Dr. Nancy Freeman, associate professor of Early Childhood Education at USC. The Children’s Center is a model of quality childcare and a valuable educational tool for students at USC who plan to work in early childhood education and related fields, she said.

“Average childcare isn’t enough. We’re committed to excellence for the children and families at the Children’s Center, as well as for our USC students,” Dr. Freeman said.

Russ Meekins, who will succeed Dr. Odom as executive director of the USC Foundations, echoed the focus on high quality childcare at the Children’s Center. The center now serves 195 students and Meekins said he would love to see the center expand. The credit for keeping the center on this track goes to Dr. Odom, Meekins said.

“The center wouldn’t be here without him. He saved it and he has been a strong advocate,” Meekins said.

Dr. Mac Brown, distinguished professor emeritus from the Department of Instruction and Teacher Education in the College of Education at USC, agrees.

“If Jerry, personally, hadn’t stepped up, the center wouldn’t be here.” Dr. Brown said. “He pulled it all together and it took a number of years. We’re celebrating the commitment of USC to early childcare.”

“I think the center has a great future,” Dr. Odom said. “I’d love to see the university embrace it even more.”