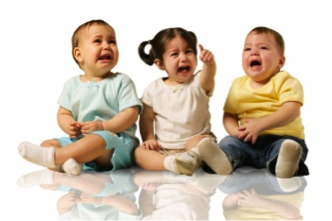 Baby Talk: Resources to Support the People Who Work With Infants and Toddlers

Using a brain-imaging technique that examines the entire infant brain, researchers have found that the anatomy of certain brain areas – the hippocampus and cerebellum – can predict children’s language abilities at 1 year of age. The University of Washington (UW) study is the first to associate these brain structures with future language skills. The results are published in the January 2013 issue of the journal Brain and Language.

Human brains process large and small numbers of objects using two different mechanisms, but infants have not yet developed the ability to make those two processes work together. “This research was the first to show the inability of infants in a single age group to discriminate large and small sets in a single task,” says Kristy vanMarle, assistant professor of psychological sciences at the University of Missouri. “Understanding how infants develop the ability to represent and compare numbers could be used to improve early education programs.” Read more at http://www.futurity.org/society-culture/babies-dont-get-big-and-small-groups/?utm_source=Futurity+Today&utm_campaign=207494bea3-June_196_19_2012&utm_medium=email

In order to support learning and development for children who are Dual Language Learners (DLLs), it’s important to understand children’s backgrounds and experiences with more than one language. This concise list identifies questions to guide conversations with parents and family members about the language practices and history of a particular young child.

An article recently published in Pediatrics compares estimates of the percentage of children younger than age 3 who are likely to be eligible for Part C early intervention services in each state and Washington, DC, based on the eligibility definitions currently in use across the country, with the proportion of children enrolled in Part C in each of those jurisdictions. Results show that states’ eligibility criteria vary widely and many children who would qualify for services are not receiving them. An abstract and the full article are available at http://pediatrics.aappublications.org/content/131/1/38.abstract/reply#pediatrics_el_55031

Baby Talk is a free, one-way listserv that is distributed every other week. Each issue features one or more resources, the majority of which are available to download at no cost.  To join the listserv, send an email with no message to subscribe-babytalk@listserv.unc.edu. To suggest resources, please contact Camille Catlett at camille.catlett@unc.edu or (919) 966-6635.