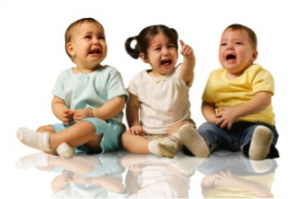 The Roots of Bilingualism in Newborns

A study from Canada found that newborns with bilingual mothers are more likely to prefer the mother’s two languages over others and are able to separate out the two languages from each other. What this all means is that children are capable of understanding more than one language far earlier than previously thought. http://infantstudies.psych.ubc.ca/uploads/forms/1268069646ByersHeinleinBurnsWerker_2010.pdf

Simple vocabulary tests on children as young as two can identify those who will find it difficult to learn language and lag behind their peers in becoming fluent. The doctors who developed the tests said they provided a means of spotting children who could benefit from early language therapy to help them reach their full potential.

Children at risk for dyslexia show differences in brain activity on MRI scans even before they begin learning to read, finds a study at Children’s Hospital Boston. Since developmental dyslexia responds to early intervention, diagnosing children at risk before or during kindergarten could head off difficulties and frustration in school, the researchers say.

Research shows that the ways in which parents play with their 2-year-olds can predict their children’s future academic outcomes. Utah State University researchers found that a number of highly stimulating activities can have a positive impact on later academic performance.

Whether it’s through singing, dancing, cuddling, or rocking, you can use games to encourage the pathways of infant and toddler brains to make new connections. Here are websites with lots of ideas.

Baby Talk is a free, one-way listserv that is distributed monthly. Each issue features one or more resources, the majority of which are available to download at no cost. To join the listserv, send an email with no message to subscribe-babytalk@listserv.unc.edu. For additional information (or to offer suggestions), please contact Camille Catlett at camille.catlett@unc.edu or (919) 966-6635.